The Sciumbato House and Grocery Store 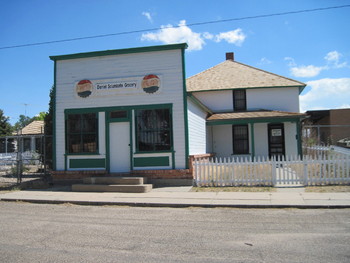 In 1984 the Urban Renewal and the city of La Junta sold the Museum 15 1/2 lots on Anderson Avenue between Second and Third Streets.  This included the Sciumbato House and Grocery Store.


This was the home of Daniel and Mary Sciumbato from 1901 to 1974, and is on the National Historic Register.  The original two rooms were of adobe construction, now shown in the dining room and kitchen.  Also purchased by the Sciumbatos was a home to the west connected to by a hallway.  That structure was removed when the west wing (living room) and upstairs were added in 1910.  In 1916, the grocery store was added.  There was also a lean-to off the kitchen used as a summer kitchen, and a lean-to off the master bedroom (now the dining room) used for a bathroom.


Water was hauled from a cistern, much like the one we have now but further away from the house.  When the Sciumbato family lived here, it was the center of town only two blocks to the church, school and the railroad.  Many of the people in this area worked on the railroad and were of Italian heritage.
Updated September 20, 2012   Contact webmaster at kdparker@centurytel.net